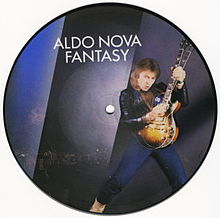 “Fantasy” is the debut single by Canadian rock musician Aldo Nova and is regarded as his most popular work to date. Released on his eponymous debut album in 1981, the song climbed to #3 on the Mainstream rock chart, and #23 on the Billboard Hot 100 singles chart. The song was featured in a flashback sequence in the final episode of the popular television series Rob & Big and also in the video game Saint’s Row: The Third. A cover version of the song, performed by Steel Panther, is the current theme song for the MTV show Rob Dyrdek’s Fantasy Factory.

I always loved this song, and wanted to post on my website for anyone else who might have forgotten about this song!
Source:  youtube.com and wikipedia.com